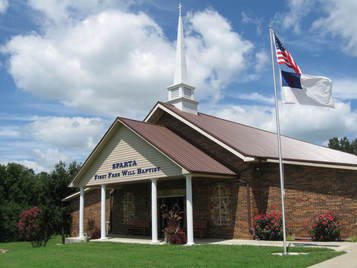 The psalmist said, “The righteous shall flourish like a palm tree: he shall grow like a cedar in Lebanon." It was a cedar tree in Sparta that united a strong group of believers.  The Rev. W.M. Cunningham and Rev. Fred L. Bradshaw began a revival on August 20, 1945, on a vacant lot belonging to the late Mr. & Mrs. Squire Johnson on Harris Street.  The revival became known as the “Revival under the cedar tree.”  The result of the revival was the establishment of the Sparta First Free Will Baptist Church.
The church was organized on September 14, 1945, with 39 charter members.  Rev. Fred Bradshaw was elected the church’s first pastor.  On September 30, 1945, the church met in the basement of Frank Fletcher’s North Oak home and organized a Sunday School.  Two months later, on November 24, 1945, the church purchased two lots on Baker Street from Frank Fletcher at a cost of $250.00 for the purpose of erecting a church building.  The building committee agreed to build a 40 by 40 foot structure of concrete block with a stone face.  The ground breaking for the church was March 26, 1946.
On September 3, 1946, the first service was held in the church basement.  The first wedding was performed in the basement with the Rev. A.D. Kerr (deceased) officiating.  On November 23, 1946 the evening worship hour was held in the upstairs sanctuary for the first time.
The church has had several good shepherds to lead the flock.  The Rev. Fred Bradshaw served as pastor from 1945-1952.  Rev. J.T. Holman served as assistant pastor from 1946-1948; Rev. David England from 1952-1964; Rev. Jerry Presley 1964-1968: Rev. David England from 1968-1974; Rev. Carson Whiteaker 1974-1986; Rev. Carson Slagle served as interim pastor in 1986; Rev. Gary Lovitt 1986-1992; Rev. Raymond Riggs 1992-1994; Bro.Robert Shepherd 1994-1997; Bro. Marvin Dan Horton 1998-2013; Bro. Gary Farris interim pastor 2013-2016; Bro. Rudy Oakes is our current pastor.
The church has been a blessing in the community and has experienced some wonderful revivals throughout the years.  The congregation has grown in attendance in recent years and is a wonderful place for fellowship for believers.
Almost 44 years to the day of the organization of the first church, a second building was dedicated.  The new larger church building was dedicated September 24, 1989. The building is 79 feet wide and 105 feet long with a seating capacity of 450 people in the sanctuary.  In addition, there are nine classrooms upstairs and two downstairs. A  Prophet’s Room, visiting minister sleeping/study area, is also located downstairs.
The rich colored paneling and cathedral ceilings of the sanctuary give the visitor a feeling of stepping into a house meant for worship.  The front showcases a mosaic of hand-selected field stones carefully arranged by Brother Loyce Mullican.  The steel blue carpet adds to the serenity of the upstairs. From the vestibule, stairways lead to the basement and balcony.
With growth throughout the years, in 2010, the church added a fellowship hall with a full kitchen, large seating area and two rest rooms.
The church is associated with the ﻿Liberty Association of Free Will Baptists﻿, the Tennessee Association of Free Will Baptists and the National Association of Free Will Baptists.  Some of the church’s services include: support of the (Free Will Baptist) Welch College, Home Missions, Foreign Missions, State Missions and Free Will Baptist Family Ministries.
Visitors are always welcome to come and worship with us.